Today (in the USA) we're marking the life of a great man, Dr. Martin Luther King, Jr.  He was an outstanding preacher who challenged our nation to live above prejudice at a pivotal moment in our history.  I especially like his quote, "I have decided to stick with love.  Hate is too great a burden to bear."

His life was cut short when he was tragically assassinated.  Although he was an imperfect person (like us all) God placed him on the public stage at a key time to deliver a clarion call, "....judge people by the content of their character not by the color of their skin."

Our schools teach children about the key elements of that difficult time in our nation's history.  Apparently, our three oldest grandchildren had just had a lesson on this issue last week.  The circumstances surrounding Dr. King's death were fresh on their minds while riding home from school.

Kristin routinely picks up our three oldest a couple of days each week.  The ramblings of these three loquacious elementary students sometimes gets overlooked by the mommies who hear them all day every day.  But we're thrilled that Aunt KK tuned in just in time to hear this little exchange taking place in the back of her van last week.

Noah: We talked about Martin Luther King today.  Did you know he was killed?

Spencer: Noah, do you know another word for killed?  Assassinated!  Martin Luther King was assassinated.  He was standing on a balcony preaching to a lot of people.

Spencer: No, that was Jesus.  (Spencer went on to give out more information with all the superior understanding a third grader can muster.  He ended with this. . .)
He was preaching and someone came in his house and shot him.

Abby:  Then he just fell to the ground.

Spencer:  KK, you know there were other people who got assassinated?  Abraham Lincoln.  John F. Kennedy

Abby:  Abraham Lincoln was shot in a theatre.  How was John F. Kennedy killed?

They proceeded to start talking over the top of one another.  Each one needed to explain some additional element they had learned surrounding that time and the topic.  Can't make this stuff up!

Here's a shout out to the teachers helping our little ones sift through the realities of history.  And to the parents who make sure their babies can discuss the Bible as well as historical matters with the same certainty.

The next time I post, I want to share some fun pictures with you from our grandparent adventure this weekend.  John and Joy went out of town for two days to celebrate their twelfth wedding anniversary.  We split up care of the children with the other two sisters.  Frank and I took the supper / bedtime/ lunch shift.  Can't wait to share what a grand time we enjoyed. 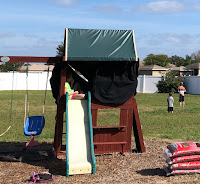 And just one more: 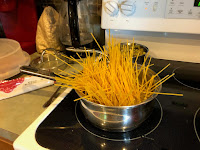 Trust me, there are stories attached to these two pictures that will make you smile at the very least and if you have a healthy funny bone, they may make you laugh out loud!

Hoping your week is Great!