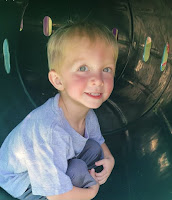 This little guy is Amazing!  His birthday was Monday and he turned three.

I know that may seem like a biased statement and I would have to agree with you.  But if you knew Grayson Oliver Smith, like I know Grayson you would say it's true.

Typically, if you read about a "tenacious toddler" it would bring to mind images of temper tantrums and unruly children running around stores being chased by frazzled mothers yelling unrealistic threats.

In my desire to be transparent, I have to say I have witnessed a couple of less than stellar moments with young Mr. Smith's temper and his mother has indeed been frazzled from time to time.  (Although I can assure you that she has never uttered a threat she wasn't willing to follow through on.  His mama is one tough cookie.)

But this post describes a different kind of tenacity.

As part of all the July birthday and anniversary celebrating, Frank and I got to go to Bok Tower Gardens yesterday.  We were part of an adventure involving all NINE grandchildren and the most capable child directors available - Joy and Kristin.

Side Note: Meagan and Nathan had saved/planned over a year to go away for their 10th wedding anniversary.  However, those celebrations are best shared with only the bride and groom.  What to do with four rambunctious offspring?  Call your sister, of course.  Joy managed her own version of boot camp so the Smiths could go away.  Wrangling her four plus the Smiths' four plus Parker meant she had NINE children most of Monday through Saturday!  If you'd like to applaud for her,  feel free to leave a comment in the box below.)

It wasn't my brightest idea that we take them all to Bok Tower.  The temperature topped out around 95 degrees and the famous Florida humidity felt like we were breathing through plastic wrap.  The park was offering one of two FREE days to the public, so it was jam packed.

But we were on an adventure!  So off we went with two kiddie wagons, a picnic lunch for 13 and a cooler filled to the brim with juices and water.

There were too many hilarious moments to record here.  You'll have to ask Joy about her telling me to lower my voice when I started yelling because I thought one of the children was missing.  Turns out, he was simply standing behind Papa and I couldn't see him.  Oh well.

Bok Tower Gardens also has a lovely spot designed specifically for youngsters.  Places to climb, make music,  sing on a stage, draw and even play in water.  The best part of the children's park is that everything is covered by lovely old oak trees offering at least a five degree drop in the temperature.  You know where we parked the wagons, right under those trees.

One of the many playstations is a large balance beam that twists and turns four times while also offering the challenge of a steady incline.  While all the children took a stab at completing the course, it was Grayson who saw the challenge as a personal issue. 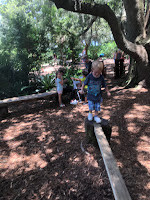 If you zoom in on this picture, you can almost feel the determination in that little three year old body.  I stayed with him long after the other children zipped through or tired of the challenge.  They went on to other stations but not Grayson.  He continued to carefully ease his way along the beam, concentrating like Nick Wallenda only to fall off again after several steps.  I offered my hand for support but he declined.  This had to be done on his own.

It took me a while to realize what was happening but Grayson had made up his mind . . . he was going to keep at it until he conquered the challenge.  Again and again he walked that first beam.  Each time his tiny foot slipped off, it meant he had to go back to the start.  He usually had to wait then for other children who were then in line ahead of him.  But he waited.

Try again.  Get a bit farther.  Fall off.  Run back to the start.  Wait in line.  Begin again.

At one point, when I could see his frustration mounting, I tried to encourage him to just start again where he fell off.  Nope!  He was having none of it.  This had to be conquered.  And the only way for him to conquer was to walk successfully every step from the very beginning to the end.

I found myself amazed that this three year old was pushing himself so hard to accomplish this feat in such a systematic way but that's our Grayson.

Over half way.  Fall off.  Run back to the start.  Wait in a longer line.  Begin again.

I'm not sure if the Lord finally sent an angel to balance him but at long last, after dozens of failed attempts, Grayson Oliver Smith made it to the end. 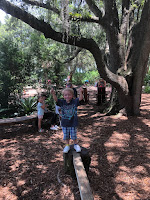 The look on his tired, sweaty little face was priceless!  He was so very pleased with himself and rightly so.  His effort had finally paid off. That much effort deserved one more close up, don't you think? 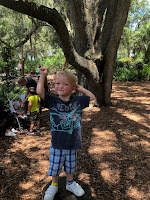 Is there really an Olympian from any country as proud as that kid is right there?  I think not.  (No, I'm not crying . . . you're crying.)

For our trip home, the three little boys were buckled in to the van Papa was driving.  The tired, stinky toddlers fell asleep almost immediately.  Joy had loaded her four in their van and left just before us.  Madi and Noah were with Kristin and me in my car. Their magpie chattering eventually tapered off and in the quiet, I pondered Grayson's determination.

I thanked the Lord for helping him stick with it until he finished.  I was grateful I had been watching and didn't miss that amazing little smile of victory.  Mostly, I prayed that Grayson's tenacity would serve him well for his future.

How about you, Dear Reader?  Is there something you need to keep pushing yourself to accomplish?  Is there a goal you set for yourself but you keep falling off the beam, so to speak?

Take a lesson from our Tenacious Toddler. Don't give up!  Keep pressing for the prize.  It may be taking more effort than you first imagined but if it's a worthwhile goal, keep going. The joy you'll feel when it's finally accomplished will certainly outweigh the frustrations you've felt while trying and failing and trying again.

I hope someday, when he's all grown up, Grayson will read this post and maybe even remember how excited he was in that moment.  It would be wonderful if I could once again say, "Keep giving it all you've got, Grayson.  Noni is proud of you!"

July is always a time of celebration around here.

Within 30 days we celebrate FIVE birthdays and a wedding anniversary.  Abby Schreck (June 30),  John Schreck, Zachariah Schreck, Noni and finally Grayson Smith.  The anniversary celebration is for Meagan and Nathan.  (Three of the five birthday people are in this picture.) 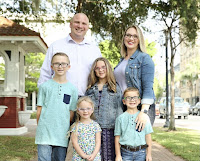 If you look to our extended family, you find two more birthdays and three more anniversaries.  Now you know the real reason behind all those fireworks at the beginning of the month. 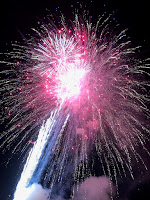 Here is the group we gathered with for fireworks on the 4th of July.  Cody (parks director for Auburndale) directs a huge display over one of the lakes in our area.  John's parents were down from NY and we had a great time.  (Included here are also the Butler, Scanlan and Rees families.)

By the time we throw in a couple of camps, conferences and maybe even a few vacation days in July we have a full schedule.

The biggest celebration this year is the 10th Wedding Anniversary of our very own Meagan and Nathan Smith!  Here they are ten years ago on the day of their wedding.  So much joy, victory and anticipation for their future . . . 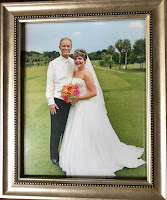 Here we find the happy couple 10 years later.  Who could ever have predicted such abundance would be entrusted to those two young kids?  Looking at the second picture, I know the words: Joy, Victory and Anticipation are richer in their story but still just as applicable for Meagan and Nathan.

They have indeed experienced great joy on their journey.  Noah, Madison, Grayson and Andrew top the Grateful List for them.  Professional growth, two home purchases, learning to reach out with encouragement for others and so much more.
Together, Nathan and Meagan have stood strong through many difficult seasons. They've chosen to allow God to guide them through the valleys of disappointment and have given Him praise on each mountaintop of victory.  Those aren't just "church-ey" phrases.  They are attitude choices I've watched them make and how proud we are of the family they are crafting.
Anticipation is the remaining word.  As we listen to them talk about their hopes and dreams for their future, we feel confident that the next decade will be one beyond what we could think or even imagine.  (Sounds just like a scripture promise, doesn't it?)
As I look back over the post for today, I see only smiling faces.  Please remember, every family has its own struggles.  For every smile there could easily be ten pictures with tears, sadness and harsh words that led to repentance and forgiveness.   That's just the story of all our lives, right?
(I mean think about it friends.  Ten years of diapers for all those kids?!!)
What I want to say is this, life is going to happen to us all and many days, the sorrow will seem to heavily outweigh the joy.  But the choice of focus is left completely to us.  What will I rehearse more, the joy or the sorrow?
Allow me to leave you with a thought from my precious mama who lived a boat load of both experiences.  She would often say to me, "Sheri, in this life you're either going to laugh or cry.  I choose to laugh, as often as possible!"
May that be your choice as well, my friend.  Find the joy and Celebrate BIG!
Blessings!!
How about you?  Does your family have a particularly busy birthday month?  How have you celebrated summer?  We'd love to hear about your experience in the comment section.
Posted by Sheri Hawley at Friday, July 23, 2021 No comments: