Can You Believe It?!

Regular readers will immediately note this picture is inaccurate.  It was taken Thanksgiving, 2018 before anyone had even a clue Andrew Ryder would be joining us in 2019. 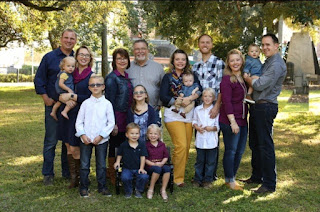 Last week, Becky Smith (of Smithellaneous fame and mentor to many writers like myself) was visiting the newest baby we co-grandparent (that would be Andrew.)  She sat down with Frank and I one morning to show that it would only take five minutes to teach us how to add pictures to the blog. 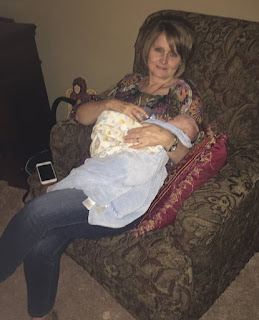 Well, things like adding photos to a blog site are easy if you have a good tech foundation.  When you're icon-dependent (like me) it's a different matter.  That explanation session actually took more like an hour.  Then I opened my site today and couldn't remember any of her clear and simple instructions.

So, I waited for my hero to come home and work at it with me again.  After another tedious hour of trial and error and trial again . . .Viola!  He did it.  Frank managed to find, edit, drag and click our way into the 21st century of blogging.

I have no earth-shattering news to report.  I have no thought-provoking illustration to share.  I have no story to weave for your enjoyment.

I'd love to hear about something new you've tried that took effort.  Would you do us the honor of sharing in the comment box?

So the two ladies in my title never met one another.  They were very much the same and completely different all at the same time.  Their love for me and my love for them - absolutely certain.  Their lives intersected this afternoon.  Allow me to explain . . .

My morning had a routine start.  Some reading; emails; a couple phone calls.  Then it was off to the imaging center for a mammogram I had put off too long.  Oh, Joy!  I took two Tylenol and was out the door by 10 AM.

(Oddly, I could NOT find my car keys and after a desperate search, I gave up and used the spare.  When I came out of the imaging center and reached into my purse,  the keys floated right to the surface from a pocket where they'd been hiding all along.  Perhaps my subconscious mind just refused to see them hoping to avoid the procedure all together.  Sigh!)

I decided to make a quick stop at a consignment shop and one other store before heading back home for lunch.  Many of my friends call this "Retail Therapy" but if I spend too much time shopping, I need therapy when I've finished.

The consignment store yielded an item Meagan needs for baby Andrew.  And as I had suspected, the other store had a couple of sections marked 75% off.  My kind of section!  I'm traveling to Pennsylvania this week to do a women's conference and to speak for a church.  If a new outfit happened to be on the 75% off rack, it would certainly merit investigating.

Unfortunately, the two dresses I tried on both left me less than thrilled.  But there was this pair of pj's that had caught my eye.  I must admit, pajamas are a special delight for me at this point in my life.  These were soft and snuggly.  The bottoms were just long enough to cover my feet and the top had short sleeves which I especially like.  One problem, the top button was missing.

I took the pj's to the register and asked if they were reduced any more because of the missing button.  It may surprise you that I would ask given the pj's were already 75% off.  But I happened to know this store is great with customer service.  The manager came over, paused a moment then asked me, "Would another 20% be okay?"  "Absolutely!  Thank you," was my prompt reply.

When I got home, I decided to look for a button to sew on right away.  I was afraid that waiting would allow me to settle for a safety pin and that would never do for such a cute top.  Now please bear in mind, I'm no seamstress!  But I do keep a Tupperware box under my bed which had belonged to my friend, Ms. Anne.  It was among the many things she gave to me before she died.

There were a few buttons in the box but none that would fit.  I started scrambling to find a button.  (Some of you will be appalled to learn that I typically toss spare buttons because I so seldom need them.  It's my attempt to keep clutter at bay.)

Finally, I spotted a tiny ziplock bag in the corner of my jewelry box.  The bag held one earring and a tiny blue button.  I knew immediately, Mama had given me the bag.  She had found the earring at her house and thought it was mine.  The button had such a lovely pearl look she had saved that for me, too . . . just because.

I used the needle and thread Ms. Anne had given me to sew on the little pearl button Mama had given me and got tears in my eyes thinking how they'll both be remembered every time I wear my new pj's.

Don't you find yourself hoping you do things that will cause people to think fondly of you even when you aren't around?  Mama moved to Heaven almost eleven years ago.  Ms. Anne moved there last year.  But today, both ladies felt very near because of small acts of love they probably considered insignificant at the time.  (Yes, I'm crying again in case you're wondering.)

Mama and Ms. Anne . . . feisty, funny and forever etched in my heart.  They didn't meet here but I look forward to introducing them some day in Heaven.  When I tell them the story of the button, they will both make fun of me for being so sentimental, I feel certain!

Yes, I do love fresh fruits and vegetables!  Ask any of my family or close friends.

However, this post is about something totally unrelated to what you could find in a supermarket.

I was recently talking with a friend who has lived a life full of adventure.  After experiencing the heartbreak of being abandoned by her husband, she decided to go back to school . . . in her 50's!  She finished her nursing degree, added a counseling degree and accepted a position as an English teacher/school nurse . . . in Korea! After more than two decades alone, she married a wonderful man whom she met . . . on line!  Nope, not making this up at all.

She is a hero of sorts, in my book.  Her tenacious faith in God and fierce love for her family are benchmarks I'm reaching for, as well.  Susan (not her real name because I didn't get to ask permission to share) is still incredibly active even though well past her 80th birthday.  Her vivacious spirit and undaunted love for people inspire me.

While we were talking, I felt prompted to have her pray for me.  (Frank and I have always been careful about who we ask to pray over us.  We make sure they are living a life we want to emulate.)  She, her husband and I formed a little prayer circle that became a sanctuary right there in the middle of people swirling all around.  She prayed the most tender but direct prayer I've heard in a long while.

Just as we prepared to part ways, she looked me dead in the eye and said, "Keep Producing!"  I was a little taken aback and I'm sure my face reflected my puzzled thoughts.

"Keep producing at least a little something every day," she explained.  "That way, when God opens the door you'll have material and stories to draw from.  He WILL open the door in due time.  Make sure you're ready."

No way to misunderstand that message!

Her words took me back to a moment when I was a young mother.  My life was on the fast track.  I had three little girls under the age of 6.  My husband was working far too many hours and had us involved in multiple projects that seemed to require extra effort at least every other month.  I was doing my best to keep up but it was a stretch that had me close to the snapping point.

A lady I respected walked up to me one Sunday evening and said, "Sheri, the Lord wanted me to share this scripture with you."  She gave me the passage written on a scrap of paper and left.  When I finally got time to read it the next day, this is what I found . . .
Isaiah 46:4
I will be your God throughout your lifetime -- until your hair is white with age.  I made you,  and I will care for you.  I will carry you along and save you.

Now many of you will think this a lovely little promise that could be made into a cross stitch and framed.  But my response was that of an exhausted mom and immature christian.  "Carry Me?!  Why does she think I need a scripture about being carried?  I'm doing just FINE, thank you!"

Yes, God is gracious and patient and I did eventually learn the bigger truth of this promise.  I believe He wanted me to understand that no matter where we are on this journey, we're never alone.  He promises in another passage to never forsake us; never to leave us.

Here's how I feel I should blend these two concepts today.  If we just stay faithful at doing the task directly in front of us, He will stay faithful in supporting us.  My job is to maintain passion for producing at least some small contribution every day.  His promise is to maintain passion for His child (that's you/me) and carry us along as we lean into His rich love.  Pretty generous exchange on God's part, I think.

So, for one more day I will understand the importance of producing.  And I will trust Him with the outcome.  Anyone game to join me in developing a passion for produce?


How about you?  Is there a word of encouragement someone gave you years ago (or recently) that has impacted your life?  We'd love to hear about it in the comment section below . . .