Life has been rather hectic for us lately.  (You, too??!!)  I've had a couple of writing deadlines and I'm working with my friend, Becky of Smithellaneous fame, trying to send, edit, retrieve then email several pieces.  Nerve-racking is an understatement!  So I reached back to a post from two years ago that has a strong, timeless message.  I hope you enjoy it! 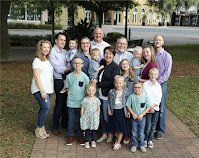 Regular readers of Embrace the Grace are already aware - we are a BIG family!

We started out as a medium-sized tribe.  One dad.  One mom.  Three daughters.  That was the nucleus for a couple of decades.

Then husbands started being added.  Because our daughters were beautiful, brilliant and bubbly, we KNEW husbands would show up, eventually.  We had no idea they would each be such amazing men who would love our girls so richly.  Bonus!  Family gatherings picked up a bit in both volume and in fun.

As you can imagine, our family dinners are no longer calm opportunities for adults to linger and connect.  We are sixteen all together and our meals resemble something more like loud, controlled chaos.  We still pause to pray together.  We still sit together at one very long table extending from the dining room into the kitchen.  (Well actually, it's two tables put together to look like one long table.)  Once someone says, "Amen!" it immediately gets LOUD again.

But we love being a BIG family.

A friend made a plaque for me last year which explains our dynamic well.  "Noni and Papa's - Where Cousins go to become Friends!"  When Madi had her birthday last month, she had the choice of inviting one friend to join her for the day.  Her choice was Abby, of course.  Spencer and Noah love being together.

Frank and I took the three oldest out this weekend to celebrate the end of their school year.  They looked out for one another and shared popcorn and laughed and enjoyed every minute.  Frank and I enjoyed being with them and watching how close they are.

We never in a million years would have guessed this would be our story for this season of life.  Our girls had traveled the country and had even visited foreign countries.  My heart was prepared for them to go away to college.  Graduate.  Meet and marry the love of their life.  Then move to the far flung corners of the world.

It worked just like that until time for each of them to make a home with their husband.  Each couple, by turn, made the surprising decision to settle in this area.  So, Frank and I lovingly refer to this season as "Frosting Time!"  To be able to live near our children and their children is a gift we do NOT take lightly.  Trust me - we know to be grateful.

A couple of weeks ago, we were sitting out on the screened porch after dinner.  The rest of the family was spread all over our house.  Some still in the kitchen.  The young dad's playing frisbee in the backyard.  Some babies in the playroom and a couple sitting with Noni and Papa on the porch.

That's when the profound question was put to us.  Spencer (8) looked over at me and asked, "Noni, what do you and Papa DO when we're not here?"

His sincerity and puzzled expression made me smile.  He couldn't imagine our house without all the people, voices and accompanying mayhem we were experiencing right then.  For the first time in his young life, he realized that Noni and Papa didn't just sleep until the next time our tribe congregated.  With that realization came honest curiosity.

His innocent question told me two things:
1.  We're all so closely woven that he had never considered us apart from himself.
2.  He's growing into a bright, thoughtful young man.

I ran down the list of things that occupy our evening hours and weekends.  Cleaning, cooking, cards, tv, reading, phone calls, more cleaning.   He was satisfied by my answer but still looked pensive.  I've thought about his question a lot, too.

It's a classic, really.  Every maturing child at some point looks into the eyes of their mentor and asks a similar question,  "Who are you when I'm not around?"  If we aren't paying attention, we can brush off their curiosity or give some glib answer.

Bottom line is this, I want to be the same person ALL the time.  Whether I'm at work or the grocery store. Meeting a friend or having lunch with a co-worker.  With my children or not.  Being watched by my grandchildren or not.  I want to behave in such a way that whoever is near will see me the same way every time they see me.

That was most important to me when Frank and I first talked about marriage.  He had prepared to be in ministry and I knew many pastoral families.  I knew the pressure for children and the fishbowl feeling that life tends to create.  So Frank and I made a solemn promise to one another.  We would endeavor always to be the same people at home that we were at church.

An overly simplistic goal for some, I know.  But for us, it worked and continues to work.

So, I'll ask you the same sort of question Spencer asked us.  "Whatcha' Doin'?"   What do you choose to do when no one else is around?  Are you the same person all the time?  Really?

I no longer take tests at school but this was an important evaluation for me, nonetheless.  Out of the mouths of babes come some of the most profound statements.  May God grace us all to be the same people at all times and in all circumstances.

Posted by Sheri Hawley at Saturday, September 18, 2021 No comments: