Frank and I have been married FORTY YEARS!

I can't believe I'm old enough to have forty years of memories.  Much less old enough to have been married to this great guy for that long.  But it's true.  On December 30, 1979 we committed our lives to one another at Bellview Church in Pensacola, FL.  And it's been an adventure ever since. 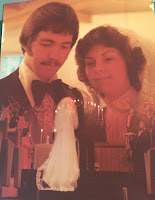 We were blessed to be surrounded by family and some of the dearest friends you could ever imagine.  College and even high school friends came in from NC, AL, SC, OH, PA, and IN.  Our ceremony was the longest in history; 55 minutes with all the music and pledging and charging.  But for us, it seemed just right.

Here are a couple more of my favorite pictures taken just after the ceremony: 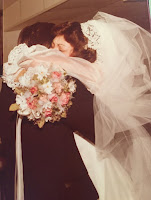 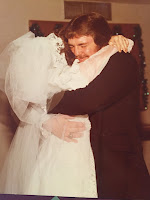 If you think these pictures show expressions of equal parts joy and relief, you're right.

Our wedding, was planned by people hundreds of miles apart.  I was teaching in Lakeland.  Frank was working and finishing college there.  My mom was living 45 miles west of my hometown (Pensacola), where we wanted to get married.  Frank's mom lived in NC.  The tux shop was in Pensacola where NONE of our groomsmen or ushers lived.  (Oh, the florist and photographer were there, too.)  My bridesmaids lived in two different time zones.  Getting our special day planned and carried out meant a LOT of time on the phone.  It was a Herculean effort by my sweet mom who played wedding co-ordinator extraordinaire!

It all came together at 3 p.m. on that Sunday afternoon.  The double doors opened for an ecstatic bride.  The handsome groom caught his breath, regrouped and began singing the beautiful song he had written just for that moment.  The chorus was: "Come with me forever.  We'll live our lives hand in hand.  Now in His name I surrender my love to you...."

Who could resist saying YES to such a romantic, dedicated guy as that?  Not I.

And here we are all these years later.  Some of you are probably wondering how we celebrated such a huge milestone. A Trip?  Special Dinner?  Cruise?  Party?   Oh, we had plans alright.  We started by taking an extra day at Christmas to visit the church where we were married and spent a night at Pensacola Beach just like we did so long ago.

But yesterday, on the actual big day, we celebrated by living out our vows.

Sunday night, I started feeling badly.  We scraped our evening plans and just watched a movie.  As I got ready for bed, my pain increased and suddenly we knew this was serious.  I had contacted some sort of stomach bug which caused my tummy to start rejecting everything I had eaten during all of the entire Christmas season.

Every hour on the hour until well after two a.m., Frank was up changing the liner in the little trash can stationed on my side of the bed.  He put a blanket in the dryer then wrapped my feet to help with the chills.  He kept wringing out washcloths for the back of my neck.  He patted my back so I could doze off.  He prayed.

When I finally came back to the land of the living around 6 a.m., I found him in the other bathroom.  The bug had leapt from me to him.  Time to reverse caregiving roles.  Of course, neither of us felt like moving . . . at all.  So, we each chose a couch and just laid around all day long.  (Please note I've spared you any pictures from that unpleasant scene. LOL)

Kristin literally ran in around noon and right back out delivering sprite, soup, gatorade and cream of wheat.  It was a less than stellar day.

Happy Anniversary!!  Of course, don't most vows include something about, "In sickness and in health..."?  Yep, lived it out.

As I write this post, Frank has started the task of De-decorating our home.  The big nativity has already disappeared and we'll start the tree as soon as I'm finished. We've decided to move our special dinner plans to tomorrow.  After all, it's not the exact date that makes it special, right?  Thanks for taking a trip down memory lane with me today.

I pray blessings for each of us as we step into this new decade.  May we each come closer to the Savior who loves us most and may we find courage to step out in new ways that honor Him.  Thanks again for making Embrace the Grace part of your reading schedule!