I promised a post describing a realization I had this month that is a Really Big Deal.  Here goes.

Several weeks ago, we received the same advertisement we always receive in September.  Shiny graphics and photos heralded the soon-to-be Homecoming Celebrations for our alma mater, Southeastern University. 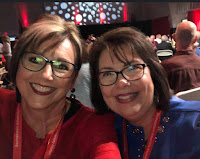 Frank and I have only attended Homecoming sporadically since moving back to central Florida.  Our calendar is usually filled with family or church events for the same weekend.  While reading the brochure this September, I suddenly had a realization.  Homecoming 2019 would be more significant for me.
Here's the Really Big Deal.  I didn't graduate from college in 2009.  Not in 1999.  Nor in 1989.  I walked across the stage to receive my B.A. in Secondary Education and Bible in the year of our Lord 1979.  FORTY YEARS AGO!! Told ya, really big deal.

Dear Friends, I barely feel forty years old now.  How can it be that I've been out of college for that many decades?  My days of living in Bethany Hall seem too clear to have been that far back in my personal history.  Granted, I did graduate a year early.  But still,  Forty Years?!

As I sat shaking my head at the impossibility of it all, I began realizing just how significant the year 1979 was for me.  Graduation from college was only the beginning.

Two weeks after graduation, Frank took me out for a very fancy celebration dinner. He knew the significant mile-stone it was.  I was the first college grad on either side of my family.  I wanted desperately to be a teacher and finally the training was mine.  It was time to celebrate.

We both dressed to the nines and headed for Orlando.  We drove to Disney where he had made reservations for us to dine at The Top of the World restaurant.  It was a dream come true spot.

The restaurant sat atop the famous A-frame hotel which still operates at Disney.  The circular room boasted no exterior walls, only windows making it impossible to miss the twinkling lights below.  Each table had a private waiter wearing a tux and even white gloves.  Mel Torme was crooning love songs as his pianist played along.

For us, two young kids who grew up in more modest settings, the atmosphere was truly magical.  Just as dessert arrived Frank looked at me and said, "Sheri, will you spend the rest of your life with me?  Will you marry me?"

The question startled us both.

Frank really had intended the dinner to simply be in celebration of my graduation.  I had seen how nervous he was and sensed he wanted to say something but had no idea marriage was rolling around in his head.  There was no advance thought. There was no ring.  He just went with the emotion of the moment.

"I'll have to think about that, Frank."  It was my honest reaction.

So, 1979 brought college graduation in April and a marriage proposal in May.  I eventually said yes to the proposal and we determined we would get married the next spring.  Really Big Deal.

In June, I left for the trip I'd been planning since August, 1978.  I was part of a team of student volunteers for a mission in Athens, Greece.  The professor leading our team had been to Europe many times and suggested we go early to experience a few highlights.

We landed in Frankfurt, Germany where we rented a car and started driving.  In four days we hit five countries and many of the places one only dreams of visiting.  We then worked for five weeks helping promote missions efforts in Athens and Porto Rafti, Greece.  Really big deal.

The night I arrived home Frank picked me up at the airport and announced, you have an interview with Mr. Friar tomorrow morning.  The principal of the prestigious school where I so longed to teach had contacted Frank.  They were considering me for a position they had in middle school.

At 7AM I donned the least wrinkled outfit in my suitcase and hurried to the school office.  They offered me the position that very afternoon.  So, in August of 1979, I realized the dream that had been in my heart since I was fourteen years old.  I became a teacher.  Really Big Deal.

That same week, my dear friend Tricia and I settled on an apartment to share. I moved into grown-up life full-force with a car payment, insurance, rent and utilities.  Good thing I had a job.  Really Big Deal.

At the end of August, Frank came up with another proposal.  Why should we wait until the following spring to get married?  I had two weeks off for Christmas.  He could easily arrange time off, too.  He wanted to get married in December.

So on December 30, 1979, I donned a lovely white gown and beautiful veil.  I walked down the aisle of a church in Pensacola, FL to stand at the altar with the man of my dreams.  Really, the Biggest Deal of All.

Yep, 1979 was a whirlwind of dreams fulfilled for that twenty-one year old girl.  Actually, we're still living out all the dreams that were launched that year.  And even though my knees are a bit stiffer and my hair is a little thinner and my eye-sight has grown worse, I'm still a grateful girl.

Thanks for running down memory lane with me today.  Your friendship is a really big deal, too.